What is Heat Exchanger ?

What is Heat Exchanger ?

A heat exchanger is a system used to transfer heat between two or more fluids. Heat exchangers are used in both cooling and heating processes.The fluids may be separated by a solid wall to prevent mixing or they may be in direct contact. They are widely used in space heating, refrigeration, air conditioning, power stations, chemical plants, petrochemical plants, petroleum refineries, natural-gas processing, and sewage treatment. The classic example of a heat exchanger is found in an internal combustion engine in which a circulating fluid known as engine coolant flows through radiator coils and air flows past the coils, which cools the coolant and heats the incoming air. Another example is the heat sink, which is a passive heat exchanger that transfers the heat generated by an electronic or a mechanical device to a fluid medium, often air or a liquid coolant.

For efficiency, heat exchangers are designed to maximise the surface area of the wall between the two fluids, while minimising resistance to fluid flow through the exchanger. The exchanger’s performance can also be affected by the addition of fins or corrugations in one or both directions, which increase surface area and may channel fluid flow or induce turbulence. 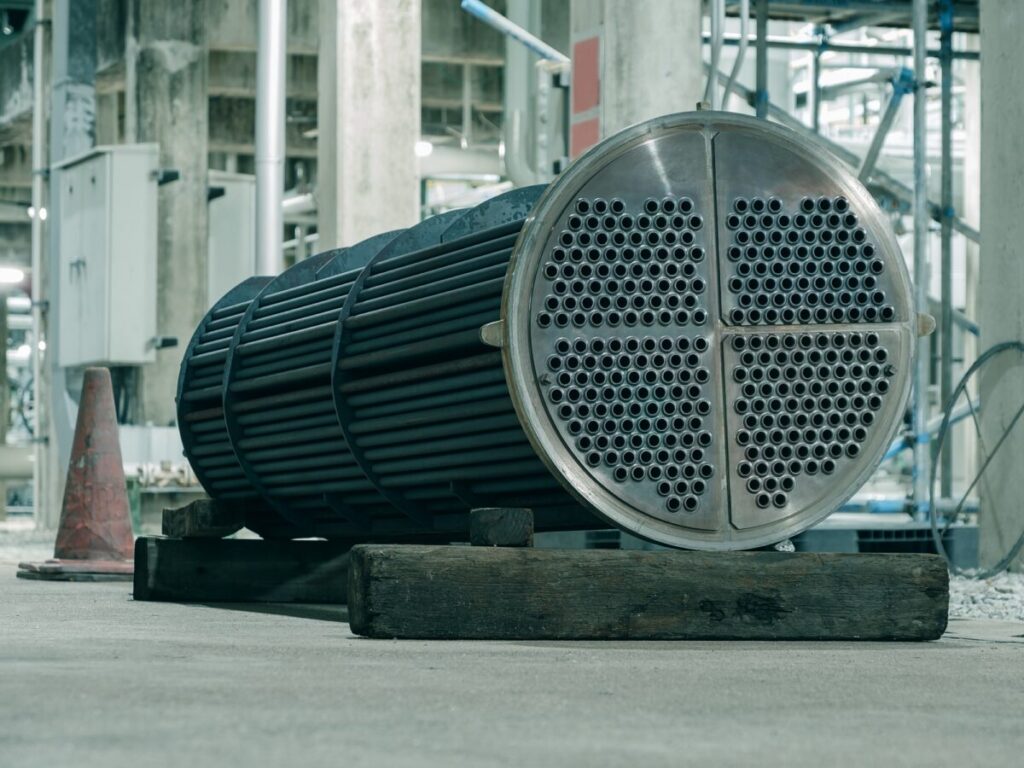 (a) When the other fluid flows into the annular gap between two tubes, one fluid flows through the smaller pipe. The flow may be a current flow or parallel flow in a double pipe heat exchanger.

(b) Parallel flow, where at the same point, the hot and cold liquids join, flow in the same direction and exit at the same end.

The figure above illustrates the parallel and counter-flow flow directions of the fluid exchanger. If this is done under comparable conditions, more heat is transferred to the counter-flow device than to the parallel flow heat exchanger. Owing to the large temperature differential arising from the high thermal voltage, the temperature profiles of the two heat exchangers display two significant disadvantages in the parallel-flow design. Which indicates that the partnership is a distinct disadvantage if it is intended as a design to increase the cold fluid temperature. Where two fluids are expected to be taken to exactly the same temperature, the parallel flow configuration is beneficial. While the counter flow heat exchanger has more significant advantages compared to parallel flow design. Where it can reduce thermal stress and produce a more uniform rate of heat transfer.

The main constituents of this type of heat exchanger seem to be the tube box, shell, the front rear end headers, and baffles or fins.

The baffles are used to support the tubes, direct the fluid flow to the tubes in an approximately natural manner, and maximize the turbulence of the shell fluid. There are many various kinds of baffles, and the choice of baffle form, spacing, and geometry depending on the allowable flow rate of the drop in shell-side force, the need for tube support, and the flow-induced vibrations. There are several variations of shell-and-tube exchangers available; the differences lie in the arrangement of flow configurations and details of construction.

In application to cool air with shell-and-tube technology (such as intercooler / charge air cooler for combustion engines), fins can be added on the tubes to increase heat transfer area on the air side and create a tubes & fins configuration.

3. Plate Heat Exchanger A plate heat exchanger contains an amount of thin shaped heat transfer plates bundled together. The gasket arrangement of each pair of plates provides two separate channel systems. Each pair of plates form a channel where the fluid can flow through. The pairs are attached by welding and bolting methods. The following shows the components in the heat exchanger.

In single channels the configuration of the gaskets enables flow through. Thus, this allows the main and secondary media in counter-current flow. A gasket plate heat exchanger has a heat region from corrugated plates. The gasket functions as a seal between plates and they are located between frame and pressure plates. Fluid flows in a counter current direction throughout the heat exchanger. An efficient thermal performance is produced. Plates are produced in different depths, sizes and corrugated shapes. There are different types of plates available which include plate and frame, plate and shell and spiral plate heat exchangers. The distribution area guarantees the flow of fluid to the whole heat transfer surface. This helps to prevent stagnant areas that can cause accumulation of unwanted material on solid surfaces. High flow turbulence between plates results in a greater transfer of heat and a decrease in pressure.

4. Condensers and Boilers Heat exchangers using a two-phase heat transfer system are condensers, boilers and evaporators. Condensers are instruments that take and cool hot gas or vapour to the point of condensation and transform the gas into a liquid form. The point at which liquid transforms to gas is called vaporisation and vice versa is called condensation. Surface condenser is the most common type of condenser where it includes a water supply device. Figure 5 below displays a two-pass surface condenser.

The pressure of steam at the turbine outlet is low where the steam density is very low where the flow rate is very high. To prevent a decrease in pressure in the movement of steam from the turbine to the condenser, the condenser unit is placed underneath and connected to the turbine. Inside the tubes the cooling water runs in a parallel way, while steam moves in a vertical downward position from the wide opening at the top and travels through the tube. Furthermore, boilers are categorized as initial applications of heat exchangers. The word steam generator was regularly used to describe a boiler unit where a hot liquid stream is the source of heat rather than the combustion products. Depending on the dimensions and configurations the boilers are manufactured. Several boilers are only able to produce hot fluid while on the other hand the others are manufactured for steam production.

How to Clean Heat Exchanger Tubes and Condenser Tubes

Clean heat exchanger tubes and condenser tubes is essential to keeping this equipment operating properly.  Condenser and Heat Exchanger Cleaning can be a dirty job, but proper care and maintenance of this equipment can save significant amounts of money and extend their life cycles. When cleaning heat exchangers and condensers it is important to attempt to maximize the quality of the cleaning as well as the safety of the process, while at the same time minimize the cost of the cleaning and the time the equipment will have to run in order to clean it. Although these can be conflicting goals, it is important to choose a cleaning technique that will balance all of them.

Projectile’s recommended method to clean heat exchanger tubes and condenser tubes, mechanical tube cleaning, effectively balances these aspects with a high quality, safe, quick, and low cost, solution for removing tube deposits. Projectile’s method works by loading patented mechanical devices, called projectiles, into each tube and then shooting the projectile down the length of the tube to scrape off adhering deposits. The projectiles are propelled with safe, low pressure water of approximately 350psi (25 Bar). After all tubes are successfully cleaned, a technician checks each tube with a high powered spotlight to locate and mark missed projectiles

SA179tubes.com is a leading supplier, stockist, manufacturer & exporter of ST52 Grade Seamless Pipe And Tubes. Get in touch with us for the best rates & availability.

0 Comments on "What is Heat Exchanger ?"

Your email address will not be published. Required fields are marked *